The Muscles of the Back

Muscles make up a large part of the anatomy (structure) of the back. They start at the top of the neck and go down to the tailbone.

Back pain is common and might be caused by a problem with a muscle. This article gives an overview of the back’s structure and its major muscles.

The back’s structure is complex. It is made up of the spine, discs, nerves, muscles, tendons, ligaments, fasciae, and other structures. Each of these parts are individual structures that function together.

Your back muscles extend from the bones of your neck (cervical vertebrae) to your lower back (lumbar spine) and then to the base of your lumbar spine (sacrum) and tailbone (coccyx). Some of these muscles are quite large and cover broad areas, e.g. large areas of the trunk.

Other muscles are small and cover much less space. Certain back muscles extend to other areas, like the ribs, shoulder, shoulder blade (scapula), upper arm (humerus), and thigh (femur).

There are three different types of muscles in the body. The myocardium, the specialized muscle of the heart; smooth muscle that makes up the walls of the intestines, stomach, etc.; and skeletal muscle that supports bones.

Every Muscle in the Body Has 3 Parts

Every skeletal muscle has three main parts: the origin, insertion, and belly.

What Do Tendons Do?

In the back and elsewhere in the body, tendons attach muscles to bones. They help support bones and make them move.

Types of Back Injuries

There are many types and causes of back injuries. Muscle or tendon injuries are common ones.

A strain is a stretched or torn muscle (also called a "pulled muscle"). Strained muscles can occur anywhere in the back. They often affect the muscles supporting the large curve of the lower back (lumbar spine).

What could cause a muscle strain? Recovering from quick movements, like a loss of balance.

Since tendons are located at the ends of muscles, where they attach to bones, a strain may involve both the muscle and tendon at the same time.

What could cause a muscle and tendon strain? Bending or twisting and lifting a heavy package.

If you are experiencing back pain, take a free Goodpath assessment for a personalized back pain program designed just for you.

As with other parts of the body, the back has several layers of muscles. Some are closer to the surface (superficial muscles). Moving deeper into the body, there are intermediate muscles and deep muscles.

The back has different muscle groups that work together to allow movement. There are groups of muscles that move the head, shoulders, arms, hips, legs, and spine.

Some of the muscles are discussed in more than one of the next sections because they have more than one function. For example, the longissimus capitis muscle helps move the head, but it also helps extend - i.e. move the back.

Muscles in other parts of the body also help move the head, shoulders, arms, hips, legs, and spine. For example, a muscle group located in the chest also helps move the shoulders.

How Many Muscles are in the Back?

The back has a total of 40 muscles. There are 20 muscle pairs, one on each side of the body. Depending on how the muscles are counted (e.g. muscles that support breathing may or may not be counted), the total number may vary.

There are four sets of muscles that help move the head. They are the sternocleidomastoids, semispinalis capitis, splenius capitis, and longissimus capitis muscles.

The sternocleidomastoids are strong, large muscles located on either side of the neck. Individually, they rotate the head left or right. Together, they flex or bend the head towards the chest. These muscles start at the breastbone (sternum) and collarbone (clavicle) and end behind the ears (at the mastoid process of the temporal bone of the skull).

If you have a stiff neck, it may be a problem with one of your sternocleidomastoids.

The semispinalis capitis, splenius capitis, and longissimus capitis muscles all help the head extend toward the back. They also work with sternocleidomastoid muscles to rotate the head left and right.

You might have soreness in these muscles if you have poor posture (i.e. your neck bent forward) when working on the computer.

There are seven pairs of muscles that move the shoulders (three of these pairs are located in the chest, thus they are not discussed here). The other four pairs of muscles are the trapezius, levator scapulae, rhomboid major, and rhomboid minor (the rhomboids).

The large muscles of the upper back, also known as traps – are shaped like trapezoids or diamonds. They move the shoulder blades (scapulae). The trapezoid attaches to the occipital bone of the skull, the outer portion of the clavicle, and the acromion process of the scapula 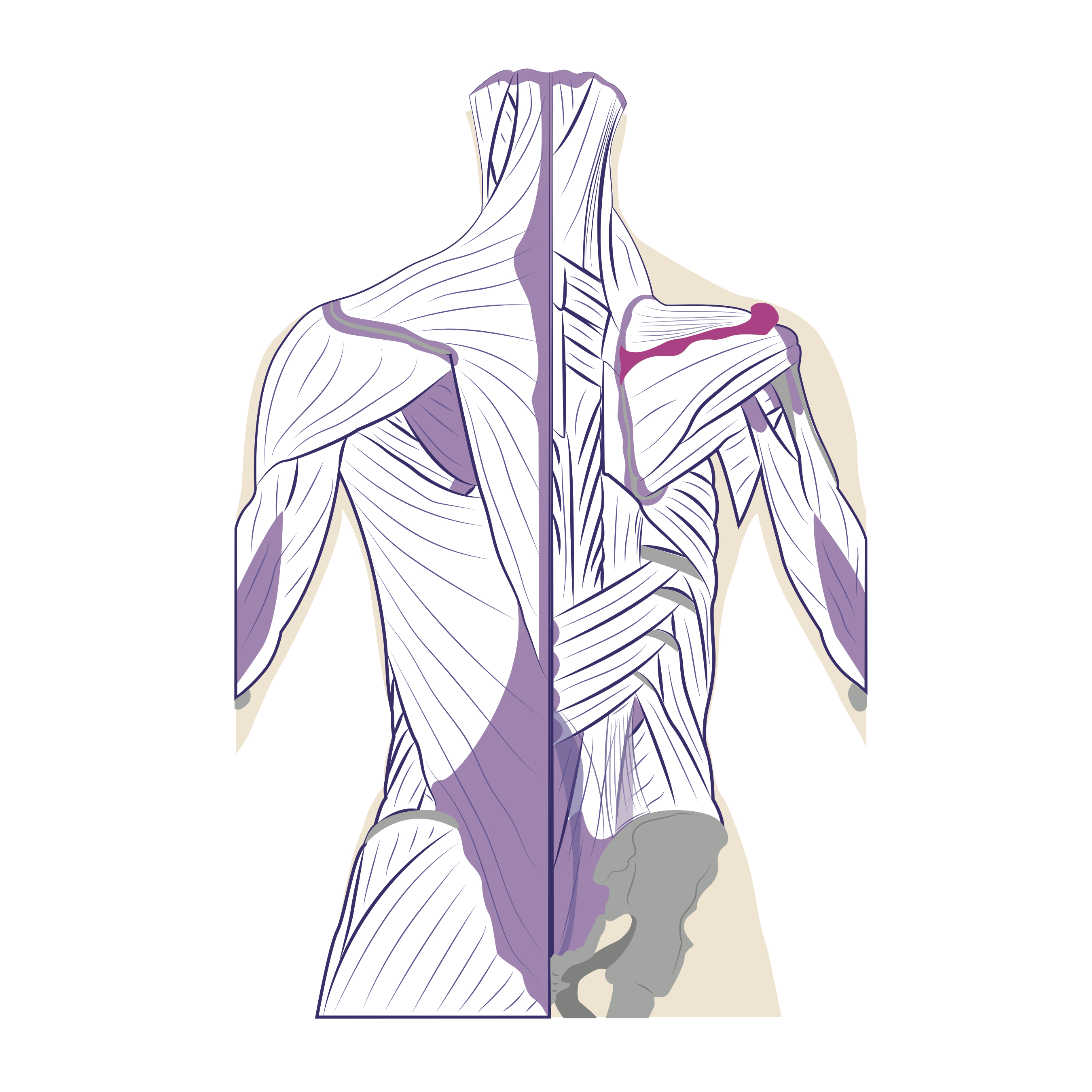 A swimmer may have pain in the traps or levator scapulae from overdoing it.

The levator scapulae muscles raise the bones of the shoulders. "Levator" means raise (think of an elevator).

The rhomboid major and rhomboid minor are two pairs of muscles that also help move the shoulder blades.

There are five pairs of back muscles that help move the shoulders and upper arms. They are the latissimus dorsi, supraspinatus, infraspinatus, teres major, and teres minor.

The latissimus dorsi, often called the lats, are large, wing-shaped muscles that extend from the upper to the lower back. They help move the arms and shoulders.

You can injure your lats from lifting something heavy over your head.

The supraspinatus muscles (with the deltoid muscles 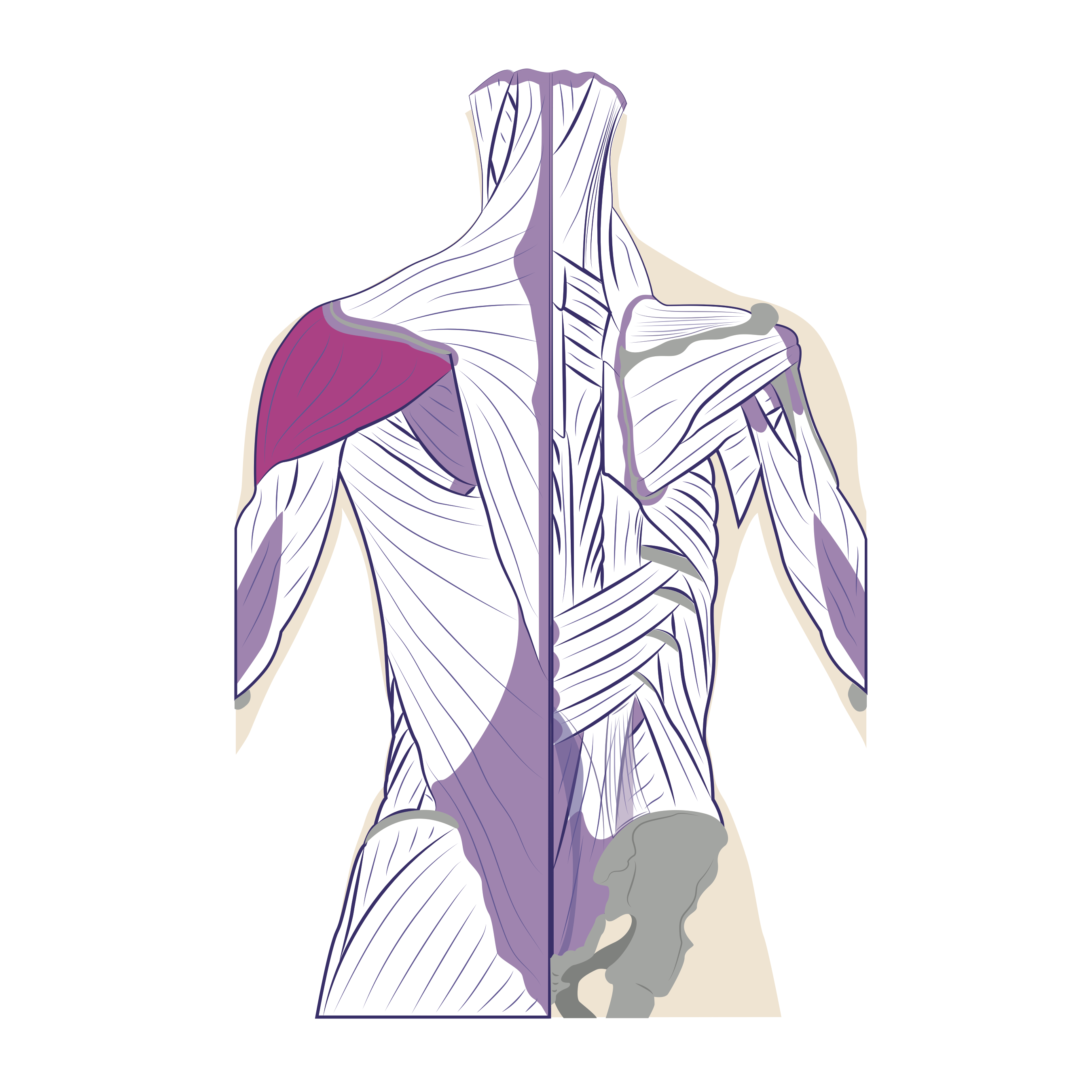 The teres major and minor muscles help move the shoulders and arms in many ways. For instance, the teres minor muscles aid in rotating or turning the arms.

There are several pairs of deep muscles that help move the spine (again, the vertebrae) - not all are located in the back. Those that are include the sacrospinalis (spinalis, iliocostalis, longissimus) and quadratus lumborum muscles.

The sacrospinalis (also called the erector spinae) is actually three muscles. They are the spinalis, iliocostalis, and longissimus.

Each of these muscles is divided into three parts that correspond to the part of the back where they’re located. For example, there is the spinalis thoracis muscle located in the upper back, or thoracic, area.

The sacrospinalis includes the:

In addition to moving the head, the longissimus helps to move the upper spine. The quadratus lumborum muscles are in the lower back. They help to bend the back to either side.

An injury to the quadratus lumborum may be the cause of low back pain.

The Muscles that Move the Upper Legs (Thighs)

There are many muscles that move the large bone of the thigh, including the iliopsoas (psoas major and iliacus) and psoas minor of the back. A large part of these muscles are anterior - i.e. - they are in the front of the body, but they extend to the lower back.

The psoas major and iliacus muscles make up the iliopsoas. These extend from the lumbar spine to each of the thigh bones. In addition to moving the thigh, these muscles help bend or flex the back.

The psoas minor is a small muscle located in front of the iliopsoas.

Hip pain may be related to the iliopsoas muscle.

Back Pain Prevention and Treatment

The following can help prevent injury and protect your back:

Treatment of Back Injuries

Treatment for back injuries may include supplements and topical products, exercise for strength and flexibility, and weight management. The above-listed preventive measures are also part of treatment - they can help protect the area and prevent further injury.

More involved treatment may include prescription medicines, injections, or surgery.

Your core is made up of the deep muscles of your abdomen and back. Having a strong core is essential to back health.

The core muscles include many muscle pairs, such as the transversus abdominus, pelvic floor muscles, quardatus lumborum, erector spinae, and multifidus muscles).

GoodPath’s personalized approach to care helps provide relief faster. Take our assessment to begin a well-rounded back pain program in 4 minutes or less.